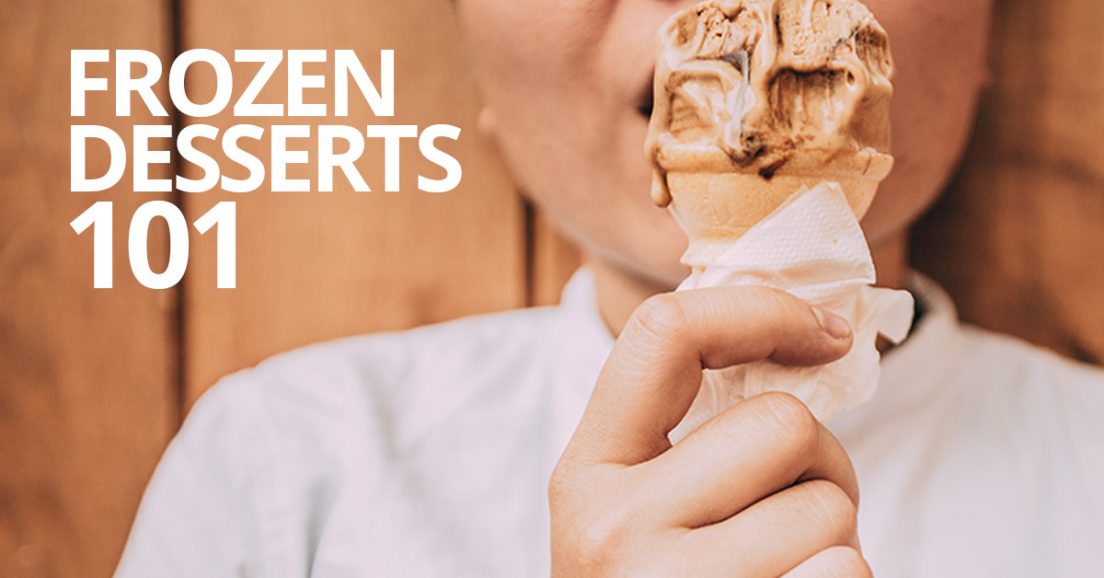 Knowing exactly what’s what in the world of frozen dessert can be a frosty conundrum to the untrained eye or inexperienced palate.

Frozen treats are all delicious in their own right. And so should be the case since they are all quite different when it comes to ingredient make up and preparation style.

Let us help you decode the frozen dessert scene. If you want to call yourself a foodie, youre going to need to know this because frozen desserts are a big deal.

Before we tackle the spectrum of frozen desserts, were going to take on the elephant in the room – Gelato versus Ice Cream.  Calling Gelato, ice cream, is like calling Taco Bell, Mexican food. Its similar, but not the same. 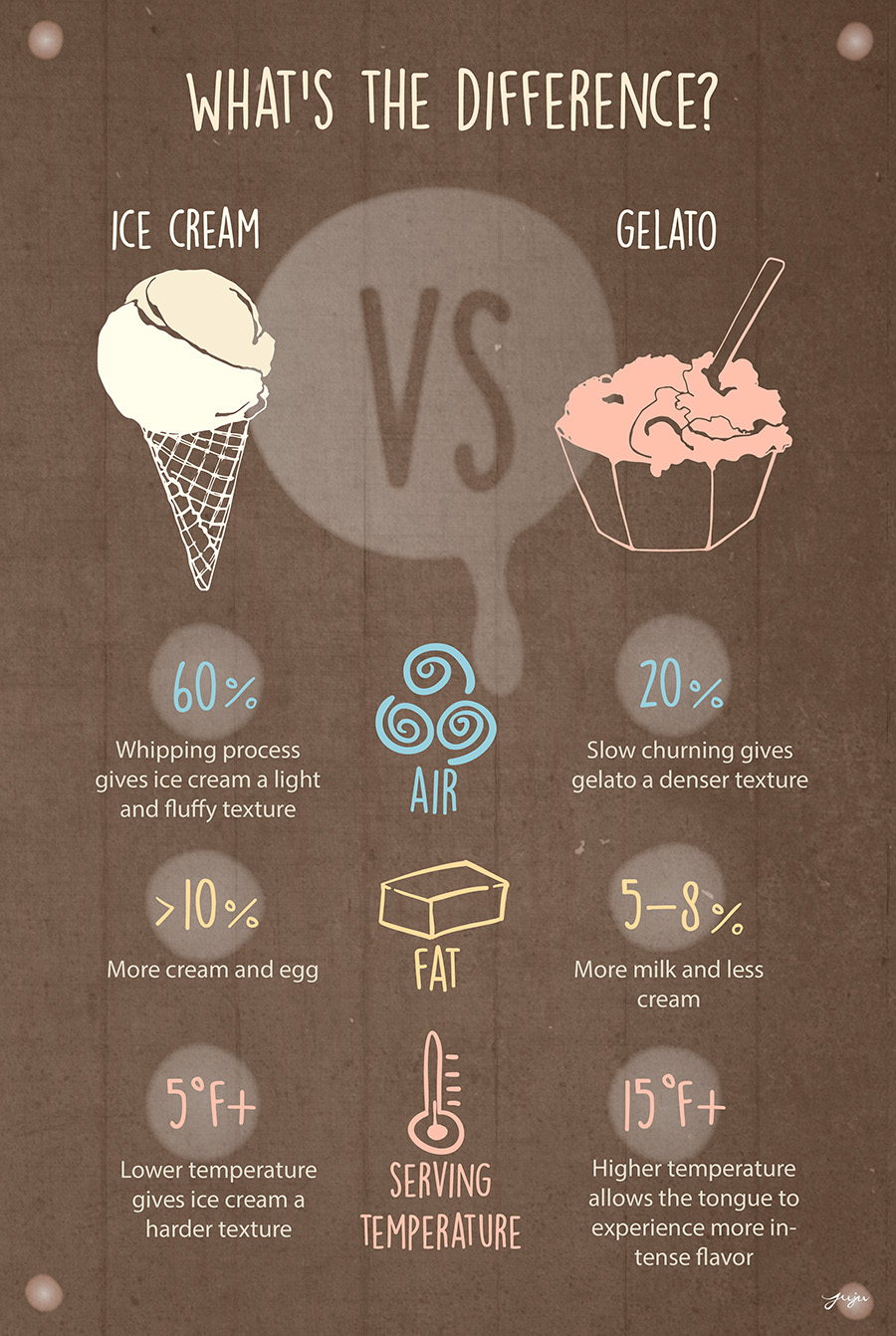 So in a nutshell, Gelato is different than ice cream when it comes to ingredients, preparation, texture, and serving style.

Traditionally, Gelato is served at temperatures around 7 to 12 degrees Fahrenheit. Add this to fact the its dense & creamy, Gelato coats your mouth providing an unmatched flavor profile (heck, you cant blame us if were a little bias here).

Liquid nitrogen ice cream is technically ice cream, but made differently. The same ingredients exist: milk fat, sweeteners, cream, sugar, stabilizers and eggs. But rather than churning and freezing, liquid nitrogen is added to the mix in order to produce the frozen end result.

With the addition of liquid nitrogen, ice cream can be made immediately and on the spot. Oh and did I mention, watching liquid nitrogen ice cream being made is probably the coolest thing in the world, literally and figuratively.

Sorbet is a frozen fruit delight made from sweetened fruit juice and fruit puree. It’s a popular frozen option for sufferers of dairy intolerances since milk or cream are not included ingredients. 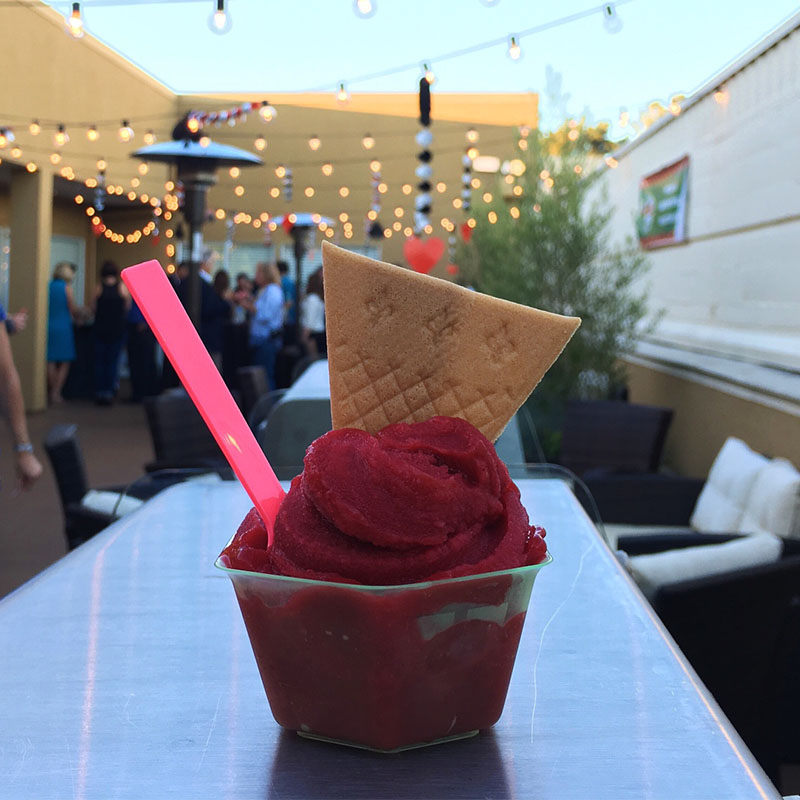 Sherbet, similar to sorbet, is also made from sweetened fruit juice. But unlike sorbet, it may contain nonfat milk.

It’s important to know this distinction between sorbet and sherbet if you suffer from dairy intolerances.

Frozen yogurt, also known as Froyo, is a yummy treat made from fermented dairy product containing live and active cultures within a skim, whole, or nonfat milk base. The Lactobacillus bulgaricus and Streptococcus thermophilus bacteria help turn the milk into yogurt. In the process, the bacteria also breaks down lactose content in the yogurt helping lactose-intolerant people enjoy it without feeling discomfort. Score! 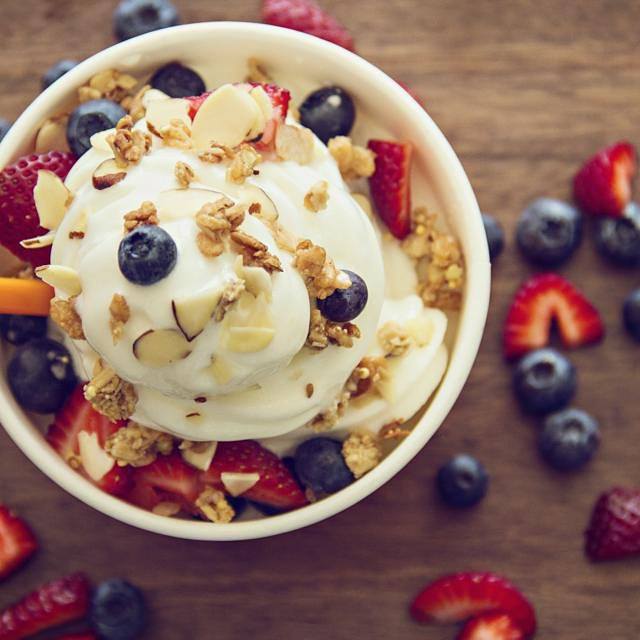 Froyo comes in all flavors from tart to sweet. Its consistency is very similar to soft serve and can often be mistaken for soft serve.

In fact, some Fro-yo joints actually sell soft serve in the same machines they use to dispense frozen yogurt. So dont be fooled. Ask an employee or look for a live & active culture badge proudly displayed on the machine if youre uncertain.

Quality yogurt isnt runny or icy. A great way to test if its runny is to flip it upside down after you swirl it into your own cup. If it falls on the floor, tell an employee and stealthily vacate the premise. Sure you can simply look at it, but thats no fun.

As for icy, taste it and youll know.

Frozen custard is very popular in the Midwest and slowly gaining steam towards the coasts. 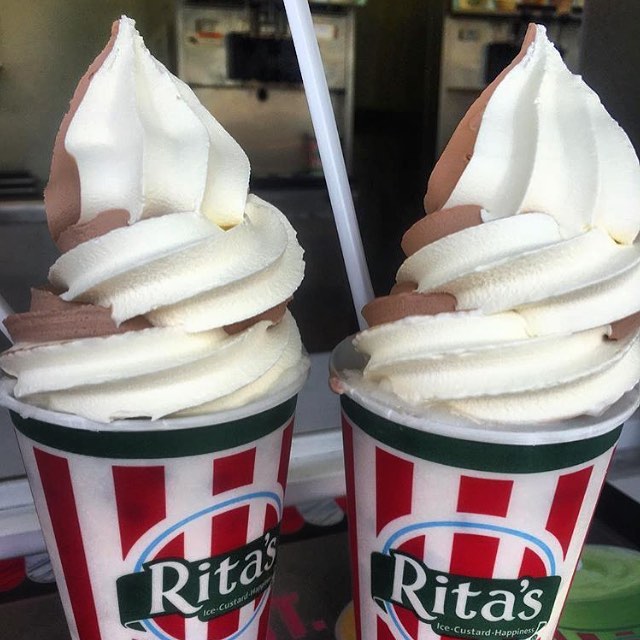 It’s essentially ice cream made with eggs and cream. If you’re thinking scrambled eggs or hard-boiled eggs inside ice cream, think again. The FDA requires custard to contain at least 10% butterfat and 1.4% egg yolk by weight of the finished food. That’s only 1.4% egg yolk minimum. Anything less and its considered ice cream.

No matter where you go, your miles may vary on how much of an emphasis the egg yolk is represented in the final custard concoction.

Now is it better than ice cream? Some say yes, many others vehemently say no. But to each his own.

And yes, were calling it shave ice not shaved ice.

Shave Ice is exactly what it sounds like.  In its most basic form, shave ice is an ice-based dessert created by shaving down a block of ice.  Simple, right? Add a little condensed milk and you have a traditional snow cap.

Now there are variations of shave ice based on texture, toppings, and geographic location – and thats where it can be a little confusing.

In Puerto Rico, their version of shave ice (Piragua) involves manual scraping of ice blocks using razor-like tools.  In the end, you have course and uneven ice shavings on par with American shave ice. In the Philippines, they add evaporated milk and other ingredients and call it Halo Halo. In Italy, they have their own called Granitas. The list goes on and on.

Shaved snow or snow ice is an ultra fluffy shaved ice dessert infused with flavor.  Shaved snow is often served as ribbons of ice sheets that is folded upon itself. Toppings are added to add flavor depth to the dish.

The key to shaved snow is how the ice blocks are made and delicately shaved down.

First off, shaved snow blocks are usually flash frozen so that there is very little separation of water and ingredient molecules during the freezing process. This flash freezing process is important because it helps prevent the formation of ice crystals. Too many ice crystals means icy consistency. In laymans terms, each bite would have a crunch.

Lastly, shaved snow is shaved down in a circular fashion to create long creamy ice ribbons. As mentioned above, these ice ribbons fold onto themselves giving the dish volume and an aesthetic look unlike traditional shaved ice offerings.

Frozen Desserts 101 has come to an end.

Knowing the differences between these popular frozen desserts is not only fun and informative, but it’s also helpful and healthy. If you suffer from food allergies, it’s important to understand potentially harmful ingredients. Likewise, if you’re watching your fat intake, it’s helpful to know which dessert choice is the wiser option.

Knowledge is power and when it comes to frozen desserts, knowledge is delicious.

This site uses Akismet to reduce spam. Learn how your comment data is processed.

Thank you for supporting our local small businessRequest a Quote
+ +